Background: Honey bee propolis is one of the natural products reported in various traditional systems of medicines, including Ayurveda. Caffeic acid phenethyl ester (CAPE) is an active constituent of propolis which is well known for its anticancer potential. The therapeutic effects of CAPE are restricted owing to its less aqueous solubility and low bioavailability.

Methods: Formulation development, characterization, and optimization were carried out by the design of experiment approach. In vitro and in vivo cytotoxicity study was carried out for optimized formulations.

Results: Developed nanoparticles showed particle size and encapsulation efficiency of 170 ± 2-195 ± 3 nm and 75.66 ± 1.52-78.80 ± 1.25%, respectively. Optimized formulation CLFPN showed sustained drug release over a period of 42 h. GI50 concentration was decreased by 46.09% for formulation compared to CAPE in MCF-7 cells, indicating the targeting effect of CLFPN. An improved in vitro cytotoxic effect was reflected in the in vivo Daltons Ascites Lymphoma model by reducing tumor cell count.

Conclusion: The desired nanoparticle characteristic with improved in vivo and in vitro cytotoxicity was shown by the developed formulation. Thus it can be further investigated for biomedical applications. 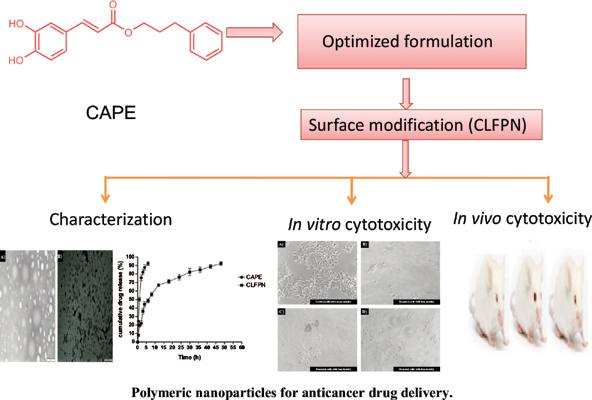