Background: Bacterial conjunctivitis is a serious ocular infection if left untreated. It is caused by several species of bacteria like Pseudomonas, Staphylococcus and Mycobacterium.

Methods: The nanosuspension prepared by nanoprecipitation technique showed successful entrapment of both water-soluble drugs in the polymer matrix indicated by their % entrapment efficiencies.

Results: Formulations showed a mean particle size <200 nm with narrow size distribution and positive surface charge due to the presence of quaternary ammonium groups of Eudragit RL100. FTIR study revealed compatibility among the components, while a reduction in the crystallinity of formulation was observed in the PXRD study. The release of both the drugs was found to be sustained in nanosuspension as compared to commercial eyedrops. Ex vivo studies showed increased transcorneal permeation of drugs from nanosuspension, where approximately 2.5-fold and 2-fold increase in the permeation was observed for moxifloxacin hydrochloride and ketorolac tromethamine, respectively. The formulation was stable at 4°C and room temperature.

Conclusion: Due to their sustained release, positive surface charge and higher transcorneal permeation, this will be a promising ocular drug delivery. 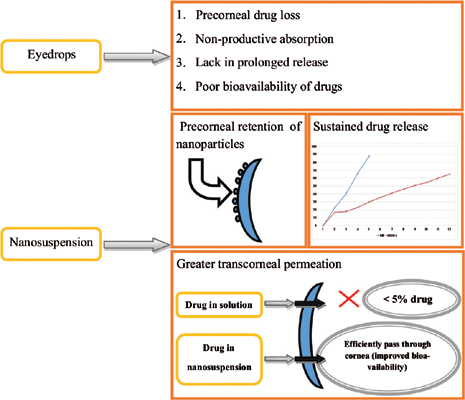