Background: Phosal based excipients are liquid concentrates containing phospholipids. They are used to solubilize water-insoluble drug and also act as an emulsifier to get the smallest droplet size of the formed emulsion after administration.

Objective: The aim is to prepare phosal based self nanoemulsifying drug delivery system (SNEDDS) for water insoluble drug zaltoprofen. Methods: The various parameters like solubility of drug in different vehicles, ternary phase diagram are considered to formulate the stable emulsion which is further characterized by Self emulsification time and globule size analysis to optimize liquid SNEDDS of Zaltoprofen. Optimized L-SNEDDS was converted into free-flowing powder Solid-SNEDDS (S-SNEDDS). S-SNEDDS was evaluated for Globule size analysis after reconstitution, in vitro dissolution study and in vivo pharmacokinetic study in rats. Results: Phosal 53 MCT with highest drug solubility was used as oil along with Tween 80 and PEG 400 as surfactant and cosurfactant respectively to prepare liquid SNEDDS. Neusilin us2 was used as an adsorbent to get free-flowing S-SNEDDS. S-SNEDDS showed improved dissolution profile of the drug as compared to pure drug. In vivo study demonstrated that there is a significant increase in Cmax and AUC of S-SNEDDS compared to zaltoprofen powder. Conclusion: Phosal based SNEDDS formation can be successfully used to improve the dissolution and oral bioavailability of poorly soluble drug zaltoprofen. 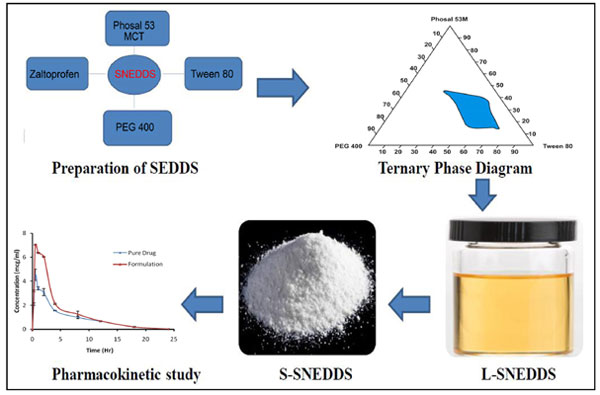