Purpose: This study aimed to develop a polymeric micellar formulation of diclofenac, an NSAID with known cardiovascular (CV) toxicity.

Methods: Diclofenac (DFN) and diclofenac ethyl ester (DFEE) were encapsulated in polymeric micelles prepared from several block copolymers based on methoxy poly(ethylene oxide)-poly(ester)s (PEO-poly(ester)s). Prepared micelles were characterized for their particle size, polydispersity, encapsulation efficiency, drug loading content, and in vitro drug release. The kinetics of enzymatic hydrolysis for DFEE micelles versus free DFEE was then examined at 37±0.5°C in rat plasma.

Results: The DFN and DFEE loaded polymeric micelles exhibited particle size in the range of 27.9-50.3 nm. The slowest release for DFN micelles was achieved with micelles of PEO-block-poly(α-carboxyl-ε-caprolactone) with a side chain of N,N-dimethyldipropylenetriamine which showed 71±3.2% drug release in 4 h followed by a sustained drug release reaching 100% within 24 h. The DFEE micelles showed slower release in comparison to DFN, and the optimal results were achieved with PEO-poly(ε-caprolactone) micelles with percent release of 7.8±4.0% of DFEE in 4 h and 12.6±2.7% in 24 h. Incubation with plasma of polymeric micellar DFEE for 48 h revealed slow appearance of DFN as compared to that with the free DFEE and a good correlation with in vitro DFEE release data.

Conclusions: The results show a great potential for DFEE polymeric micelles in controlled delivery of diclofenac. 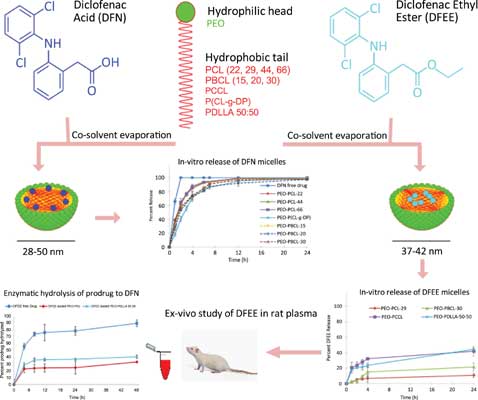