Formulation and Evaluation of Isoniazid Loaded Nanosponges for Topical Delivery


The objective of the present study was to produce controlled release Isoniazid (INH) Nanosponges for topical delivery. Nanosponges using ethyl cellulose polymer were prepared successfully using PVA as surfactant by emulsion-solvent evaporation method. The effects of different surfactant concentration, drug: polymer ratio, stirring speeds, stirring time and sonication time on the physical characteristics of the Nanosponges as well as the drug entrapment efficiency of the Nanosponges were investigated. Particle size analysis and surface morphology of Nanosponges were performed. The scanning electron microscopy of Nanosponges showed that they were spherical in shape and spongy in nature. The particle size of the formulations was found to be 124 nm and the drug entrapment efficiency was found to be in the range of 47.18% to 74.86 %. The optimized Nanosponge formulation (I6) was selected for formulating nanogels using various gelling agents like Carbopol 934, Carbopol 940, HPMC K4M and studied for pH, viscosity and in vitro drug release. Of the various formulations prepared, F2 was found to show the maximum sustained drug release of 74.26% in 10 hours. 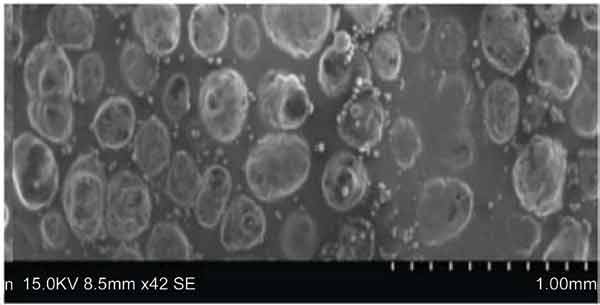