Current neuroimaging techniques in experimental medicine and clinical diagnosis are limited by low resolution and restricted image depth. Fluorescence in vivo imaging using near-infrared-emitting nanostructures, including nanocrystal quantum dots (QDs) can overcome these limitations. The objective of the present study was to establish if nanocrystals are suitable for repeated live imaging of deep structures (500 µm) in the intact animal. Intranasal instillation of QDs (5 µL) in mice with unilateral cortical microlesions resulted in marked QD accumulation at the microlesion site in the brain. Glial cell activation in response to the local devascularization played a key role in the uptake of QDs. The majority of QDs were taken up by activated microglia, whereas astroglia played a smaller role in this process. Progression and regression of the lesion upon therapeutic interventions were determined in real-time. Intranasal administration of antiinflammatory nanotherapeutics (micelle-incorporated nimodipine or minocycline) was effective in preventing lesion progression as evidenced by the smaller lesion volumes compared to the untreated controls. Moreover, lesion reduction was accompanied by significantly improved motor function. Near-infrared fluorescence imaging using nanocrystals is a valuable addition to current neuropathological methods for the diagnosis of cerebral microlesions and eventually other neurodegenerative diseases, both in experimental models and eventually in humans. 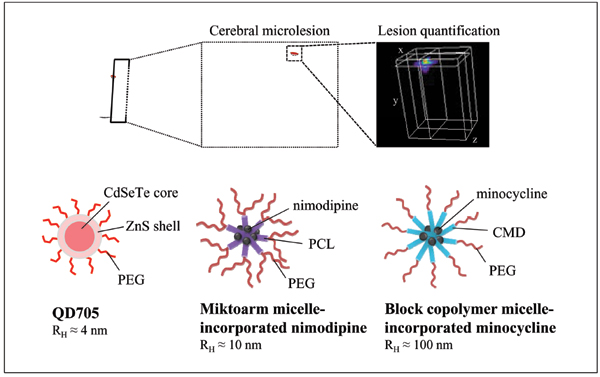