Self Nanoemulsifying Drug Delivery System of Sorafenib Tosylate: Development and In Vivo Studies

Objective: The present study aimed at developing SFN SNEDDS to improve their solubility and bioavailability.

Methods: Preliminary solubility studies were performed to identify oil, surfactant, and co-surfactant ratios. Pseudo tertiary phase diagram was constructed to select the areas of nanoemulsion based on the monophasic region. A total of 15 formulations of SFN SNEDDS were prepared and screened for phase separation and temperature variation using thermodynamic stability studies. These SNEDDS further characterized for % transmission, content of the drug, and in vitro dissolution analysis. The optimized formulation was analyzed for particle size, Z average, entrapment efficiency, and SEM analysis.

Results: Based on the pseudo tertiary phase diagram, acrysol EL 135, kolliphor, and transcutol-P as oil, surfactant, and co-surfactant were selected, respectively. All the formulations were stable with no phase separation and maximum % transmittance of 98.92%. The formulation F15 was selected as an optimized one, based on maximum drug content of 99.89%, with 98.94% drug release within 1 hour and it will be stable for 6 months. From in vivo bioavailability studies, the Cmax of optimized SNEDDS (94.12±2.12ng/ml) is higher than pure SFN suspension (15.32±1.46 ng/ml) and the AUC0-∞ of optimized SNEDDS is also increased by 5 times (512.1±8.54 ng.h/ml) than pure drug (98.75±6.45ng.h/ml), which indicates improved bioavailability of the formulation.

Conclusion: SFN loaded SNEDDS could potentially be exploited as a delivery system for improving oral bioavailability by minimizing first-pass metabolism and increased solubility.

Lay Summary: Renal cell carcinoma accounts for 2% of global cancer diagnoses and deaths, it has more than doubled in incidence in the developed world over the past half-century, and today is the ninth most common neoplasm in the United States. Sorafenib is a protein kinase inhibitor indicated as a treatment for advanced renal cell carcinoma. The present study aimed at developing Sorafenib SNEDDS to improve their solubility and bioavailability. A total of 15 formulations of Sorafenib SNEDDS were prepared and screened for phase separation and temperature variation using thermodynamic stability studies. Sorafenib loaded SNEDDS could potentially be exploited as a delivery system for increased oral bioavailability by 5 times when comparing with pure drug by minimizing first-pass metabolism and increased solubility. 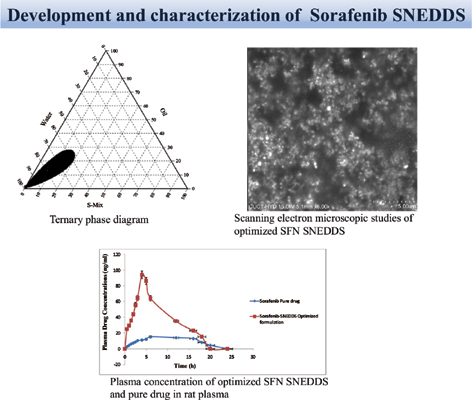