Background: Many researchers have prepared and evaluated nanosponges and claimed their advantages as an effective drug carrier, especially it was observed prominently in case of anti-fungal drugs. The materials employed to synthesize nanosponges were mainly crosslinking agents, different beta-cyclodextrin and other cellulose-based polymers. Many of them had used ratio proportions of cross-linking agents, d polymers to synthesize these nanosponges which ultimately produce a porous mesh-like network known as nanosponges where actually drug is encapsulated or loaded.

Objective: In the present investigation, we observed the effect of various levels of crosslinking agents and beta-cyclodextrin concentrations on porosity, drug encapsulation, zeta potential and drug release by employing the quality by design approach to synthesize nanosponges rather than merely keeping both concentrations in proportions. Methods: We have slightly modified the method reported earlier i.e. melting method in which we have used rota evaporator receiver vessel for melting cross-linking agent and beta- cyclodextrin, rotated at 20 RPM at 100°C. Results: In a quality by design approach, we observed that out of four dependent variables i.e. porosity, drug loading, zeta potential and drug release, three significantly depend on the crosslinking of beta-cyclodextrin molecules which is highly appreciated by the amount of cross-linking agent present in the reaction. The pharmacokinetics of Imatinib loaded optimized nanosponges were compared with the reference product to observe the pattern of absorption and disposition. Conclusion: Nanosponges synthesized by optimization technique could be effective means of anti-cancer drug oral administration as they encapsulate the drug effectively and offer a prolonged release of drug which gradually releases the drug and avoids unnecessary exposure of the drug. 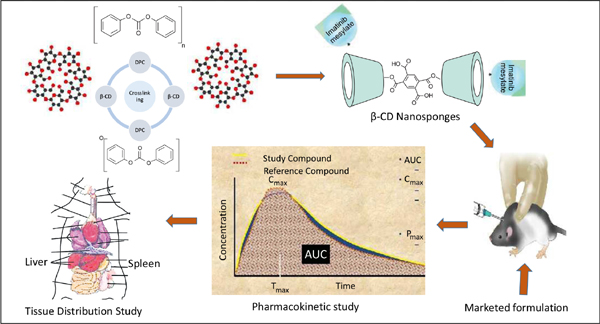